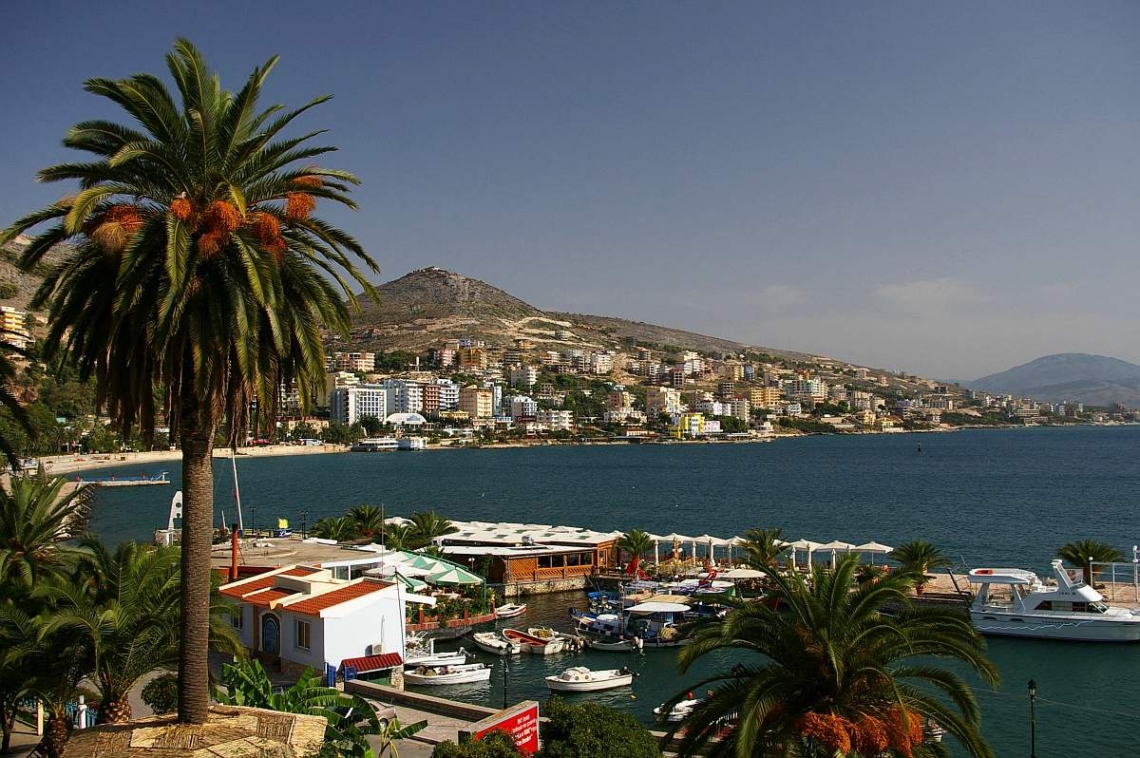 SARANDA, THE NYMPH OF THE ALBANIAN COAST

Saranda, the small town that can be called “The getaway to the Southern Albania” is situated between high mountains and the blue Ionian Sea. Built on the Ionian seashore, facing the greek island of Corfu, Saranda injoyes a typical mediterranean cilmate, wich is gentle and characterized by optimal seawater temperature. The favorable geografic position and climate, make Saranda one of the most appealing touristic destination in Albania and not only for these reasons but also for its historic and archeologic values.

In antiquity the city was known by the ancient Greek name of Onchesmos (or Anchiasmos) and was inhabited by the Greek tribe of the Chaonians. Onchesmos flourished as the port of the Chaonian capital of Phoenice (modern-day Finiq). In 552 CE it experienced repeated attacks from the Goths. Its current name comes from the name of the Byzantine monastery of the (Agioi Saranta) literally meaning “Forty Saints” in Greek, after the Forty Martyrs of Sebaste, traditionally commemorated by the Orthodox Church on 10 March. The town was included under the newly formed Albanian state in 1913, under the terms of the Protocol of Florence. It was occupied twice by Greece in 1913 and 1914-1916, by Greek insurgents of the Autonomous Republic of Northern Epirus in 1914 and by Italy between 1916 and 1920. Saranda was again occupied in 1939 by Italian forces and was a strategic port for the fascist forces of Italy. It was then temporarily called “Porto Edda” in honor of Edda Mussolini, the eldest daughter of Benito Mussolini, during which time Albania was annexed to Italy. In the meantime, it was also known by the Italian name Santi Quaranta (Forty Saints). During the Greco-Italian War the Greek army occupied a large area of southern Albania (called “Northern Epirus” by the Greeks) and the city came under Greek rule on 6 December 1940 until the German invasion in Greece and the consequent withdrawal of the Greek army in the spring of 1941.

Saranda is well-known for the world because has been so even during the comunist regime. After ’90, Saranda has been exchanged in a veri tourist city, which expects more than 1 000 000 people during the summer season. A large net of accommodating and gastronomic structure, offers the best for the tourists.

Saranda is the destination of foreign visitors not only for her blue deep waters of the Ionian sea, which offers amazing bays in different tourist villages, but even for the cultural and historic values, which are represented mostly from ancient city of Buthrotus, (UNESCO member), Foinike, the monastery and different churches of Byzantine periods, etc., the natural attractive points as Ksamili, Blue Eye, Kakome etc,.

Travelling south from Saranda, along a panoramic road by the rocky shores and marshland, you reach the archeological sity of Butrint, the most important in Albania, protected by UNESCO. The antique city of Butrint was first inhabitated by the Illyrians. Its name derives from the bull (gr. Buthrotos) that the troyan prince, Enea, sacrificed here, on his way to the Temple of Dodona to assure safe passage.

The most significant archeological objects are the amphitheatre of Buthrotus, where since sixt years is the place of the International Festival of the Theatre, organized from albanian artists, the temple of Aesculapius, the altar of baptims, mosaics, thermal baths, walls and antique entrance to the city. There is also the medieval castle of Ali Pasha, thas houses the Museum of Buthrotus. From the castle, you can see the landscape, one of the mos untouched and antique of the whole Mediterranean.

Another historical monument is the medieval castle of Lëkurës, erected on a hilltop, only 2 km from Saranda. Is was built in the 15th century, during the campain of Sulejman Pasha against the Corfu.

During your stay in Saranda you can visit also the spring of the “Azure Eye”, 18 km to the northeast of the town. The contrast of the blue waters, the vegetation, the shadows of the century-old oak trees, make this destination even more relaxing.

Ksamili is a village along the road to Butrint, with hiden azure bays like in the legends and there is a very nice destination to spend your day. Small islands in this area are full of restaurants with fresh seafood and you can taste the dishes in the midle of the blue waves.

If you sail along the seashore of Saranda, you will find the marvellous villages of Lukova, Borshi, Krorezi, where the smerald nuances of the water in the seashore, meet the deep blue of the far away. The panorama will stay in your mind as one of the most beautiful things you have seen in your life. It seems as the image of the paradise.

Luxurious hotels are built lastly in Saranda because of the growing number of the visitors. There are almost 1 million people to chose Saranda as their destination for holidays. But Saranda is visited during all year from the foreigners.

Saranda offers to you every thing starting with the seafood cuisine but is famous for its mussels of the Buthrotus Lake. You can find it in every restaurant of every category, or even in the open market in order to cook it according to your preferences.